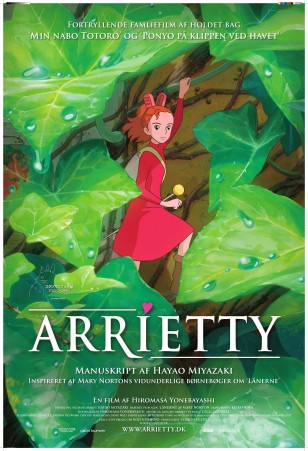 Long synopsis : This is a story of a family of “little” people. Beneath the floorboards of a sprawling mansion set in a magical, overgrown garden in the suburbs of Tokyo, tiny 14-year-old Arrietty lives with her equally tiny parents. The house is occupied by two old ladies, who are absolutely unaware of the existence of their miniature tenants. Arrietty and her family live by “borrowing”. Everything they have, they borrow or make from the things they have borrowed. Essentials like gas, water and food. Tables, chairs, cooking utensils. And treats - a sugar cube here, a scrap of material there. But only a little each time, so the ladies do not notice. A 12-year-old boy, Sho, moves into the mansion while he waits for urgent medical treatment in the city. Arrietty’s parents have always warned her: “Never let humans see you.” Once seen, little people always have to move on. But the adventurous Arrietty doesn’t listen, and Sho discovers her. The two begin to confide in each other and, before long, a friendship begins to blossom...