ASTERIX AND OBELIX: IN BRITAIN 3D 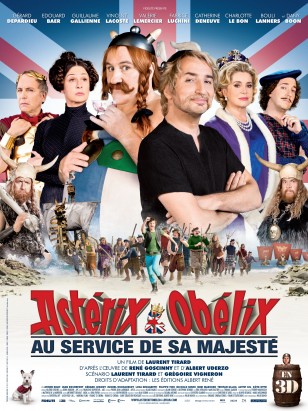 Short synopsis : Asterix and Obelix cross the channel to help Anticlimax and the Queen of the Britons stand strong against Julius Caesar and the invading Romans.

Long synopsis : The year is 50 B.C. Caesar is hungry for new conquests. At the head of his glorious legions he decides to invade the island that lies at the very edge of the known world, that mysterious land known as Britain. Victory is swift and total. Or... almost. One single tiny village manages to resist, but its forces are growing weaker so Cordelia, Queen of the Britons, decides to send her most faithful officer Anticlimax to seek aid in Gaul, in another small village famed for its dogged resistance to the Romans. At the village in question, Asterix and Obelix already have their hands full. Their chief has entrusted them with the task of making a man of Justforkix, his young pain in the ass nephew recently arrived from Lutèce. And their task is far from accomplished. When Anticlimax arrives to ask for help, the Gauls decide to give him a barrel of their famous magic potion. Asterix and Obelix will accompany him back to Britain - as will Justforkix. After all, the voyage seems to offer an excellent opportunity for completing the young man’s education. Unfortunately, nothing ever goes quite to plan...