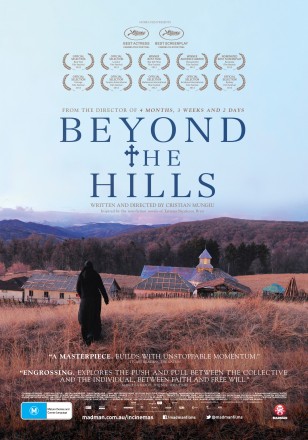 Short synopsis : Alina returns home from Germany, hoping to bring Voichita - the only person in the world she loves and has ever been loved by - back to her. But Voichita has found God - and God is the hardest lover of all to be jealous of.

Long synopsis : Voichita looks for Alina at the railway station of a small, hilly Romanian town. The girls grew up together in an orphanage and were family for each other since first grade. At 19, Alina was taken in by a foster family and later decided to go and work in Germany. Voichita found refuge in an Orthodox monastery and became a nun. There she found not only God but the family she’d never had. Feeling sick and estranged, Alina strives to get Voichita back in her life. Voichita asks permission to leave the monastery temporarily to comfort her disturbed friend, but the Priest’s answer is firm: once you have taken the path of Christ there can be no comings or goings. Voichita is not prepared to abandon her newly found peace, while Alina is baffled by her decision: what on earth happened to the girl she knew? She starts fighting with all her strength to get Voichita back, but God is the most difficult lover of whom to be jealous - and soon the inhabitants of the monastery start to suspect something evil in this force that animates Alina.