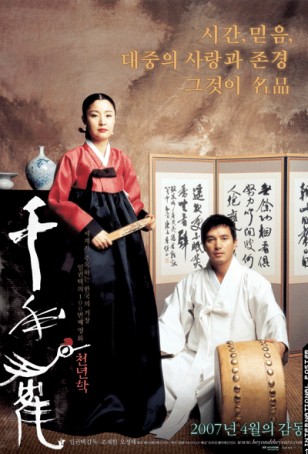 Long synopsis : Yoo-bong, a traditional singer tormented by his lack of fame, teaches his daughter Song-hwa to sing and his stepson Dong-ho to play the traditional Korean drum. Together, the trio travel endlessly. Yoo-bong is a harsh master, obsessed with perfecting the performance of his young pupils. Exhausted and unable to stand this punishing regime, Dong-ho runs away, abandoning both music and the stepsister he secretly loves. Many years pass, Now grown, Dong-ho and Song-hwa both realize the longing they have always felt for each other. In a small tavern in Sunhak, the village where he left Song-hwa, Dong-ho learns that his love is now blind, and her father dead. Dong-ho finds Song-hwa.. But their reunion is short-lived. Succumbing to the temptations of an actress Dan-shim (OH Seung-eun), Dong-ho relinquishes Song-hwa once again. Stricken, Song-hwa confesses her passionate love in song, and departs. Dong-ho pursues her, and finds himself back at the tavern in Sunhak, where a secret awaits him.