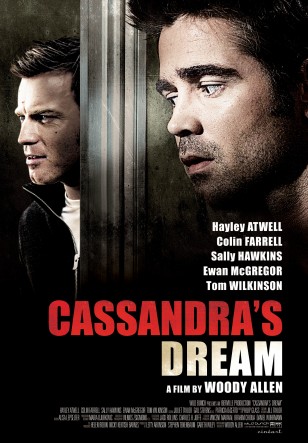 Long synopsis : DIRECTOR'S NOTE Cassandra's Dream is the story of two brothers, their problems (blind ambition and compulsive gambling,) their family, their women, their romance, passion and their chasing of dreams which end in terrible tragedy. It is a movie of the same type as Match Point, set in contemporary London and its environs and full of suspense and tension. In this case the brothers are working class and brilliantly acted by Ewan McGregor and Colin Farrell. Tom Wilkinson also appears as he's never been seen before and Sally Hawkins plays Colin's loving, terrified fiancé, while Hayley Atwell plays the ravishing, unattainable love/sex object of Ewan McGregor. The photography is by the brilliant Vilmos Zsigmond and the astonishing score by the great Philip Glass. A very powerful suspense drama. Woody Allen