CHELSEA ON THE ROCKS 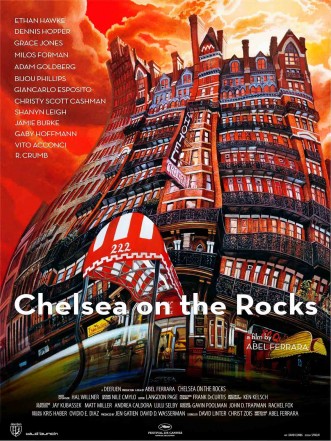 Short synopsis : CHELSEA ON THE ROCKS documents the personalities and artistic voices that have emerged from this legendary residence in the heart of New York - the writers, artists, musicians and rebels, dreamers, losers, madmen and geniuses who have made The Chelsea an American cultural icon in its own right. History, art, comedy and tragedy, the famous, the obscure and the infamous, all recorded through the vision of acclaimed maverick auteur Abel Ferrara. Interviewing current tenants, recreating scenes of past glories and intertwining archival footage with different film and video formats, Ferrara creates a film that breaks the documentary mould while capturing the crazy, glorious essence of a truly unique cultural landmark.

Long synopsis : Chelsea on the rocks will document the personalities and artistic voices that have emerged from this legendary residence in the heart of New York. The 12-storey, 250 room Chelsea Hotel - originally built in 1883 as Manhattan’s first cooperative apartment, and the tallest building in New York until 1902 - was converted into a hotel and residence in 1905. Once considered an untouchable, impenetrable tower for writers, artists, musicians and mavericks, it has recently been claimed as a boutique hotel venture for a management company who shows blatant disregard for its formidable history. The officially landmarked building is recognized as an American cultural icon and renowned for those who have lived and created there, including Sir Arthur Clarke, Bob Dylan, Stanley Kubrick, Arthur Miller, Joni Mitchell, Dee Dee Ramone, Larry Rivers, Dylan Thomas, Mark Twain, Tennessee Williams, Milos Forman, Janis Joplin, Donald Sutherland, Patti Smith, Philip Taaffe, Dennis Hopper, Andy Warhol, Edie Sedgwick, Eugene O’Neill, Jane Fonda, Larry Rivers, Leonard Cohen, Robert Mapplethorpe, Tom Waits, Courtney Lowe, Sam Shepard, Charles Bukowski, Julian Schnabel, Jasper Johns, Viva, Quentin Crisp, Jimi Hendrix and many others (some of whom will appear in this film). Beyond the famous are the little known who have made this their refuge in New York - countless writers, painters, directors, costume and lighting designers, gallerists and curators, and those who are just always there with no visible means of support. And then there are those - most famously Sid Vicious' girlfriend Nancy Spungen - who died there. Each of these characters fills out a cast that makes this story come together with the best of New York architecture, history, art, comedy and tragedy, all through the eyes and passion of acclaimed auteur Abel Ferrara. Interviewing current tenants, recreating scenes of events that occurred at the Chelsea and intertwining archival footage with different formats of film and video, Ferrara will create a film that breaks through the documentary mould into something that captures the essence of the Chelsea Hotel.