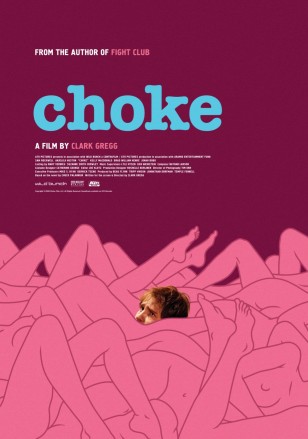 Long synopsis : An adaptation of the internationally notorious FIGHT CLUB author Chuck Palahniuk’s novel, CHOKE is a love story of tenderness and black humor about the addictive power of sex, love and strife between mothers and sons, the terrors of aging, the ugly truth about historical theme parks, and much, much more. Victor Mancini (Sam Rockwell), a dropout from medical school, has devised the perfect con to pay for his ailing mother’s (Anjelica Huston) private hospital care - pretend to choke in a restaurant and the strangers who “save you” feel responsible for your life - run the choke scam a couple of hundred times and milk the kindness of strangers into a healthy cash flow. Between choking gigs, Victor works as a “historical interpreter” at Colonial Dunsboro with a motley group of losers and stoners trapped in 1734, cruises sex addiction groups for action and visits his deranged mother in her exclusive mental hospital. When Victor discovers his mother’s Alzheimer disease hides a startling truth about his parentage, his carefully constructed life of “sex without love” topples and he find himself falling for his mother’s enigmatic doctor (Kelly MacDonald). CHOKE is a vision of life and love and sex and mortality that is both chillingly fresh and teeth-rattlingly funny.