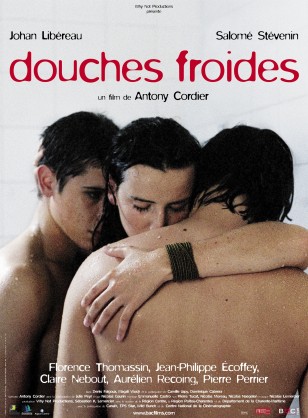 Long synopsis : Cold Showers is set today, in small-town France. Nowhere special. It tells the story of three teenagers: a beautiful girl, Vanessa, and two boys, Mickael and Clément, one rich, one poor. The story of Mickael - judo fanatic and doomed lover - and his parents, both convinced that the sky will one day come crashing down on their heads, and both more than able to cope when it does. Of how Mickael has everything he needs to make a go of his life, against all the odds. And of how he blows it. Set against a backdrop of punishing physicality, a combat-fuelled world of obsessive training and dieting and intense, illicit sexual adventure, Cold Showers also casts a piercing eye over the crucial problems of adolescence: How can anyone put up with a mother who cuts off the electricity for two weeks just to save money? Which one rules - Judo or Karate? Can you criticise your dad for hitting the bottle too hard? How do you lose 9 kilos in 6 weeks? Are there reallypeople who long for disaster to strike? What's the best way to organise a threesome? Can you handle it when it happens? And how the hell do you get the last squeeze out of an empty tube of toothpaste? Cold Showers. Blackly comic, brutally funny, heartbreaking, truthful. A tragi-comedy. About happiness and hardship, sex, luck and catastrophe.