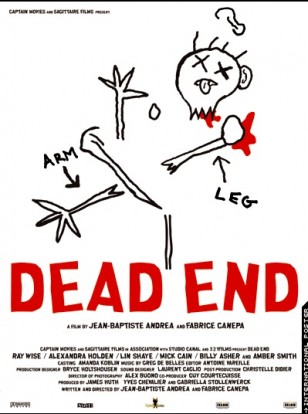 Long synopsis : For the past 20 years, Frank Harrington has grudgingly driven his family to celebrate Christmas with his mother-in-law. This year, he takes a shortcut. It's the biggest mistake of his life: The nightmare begins. A mysterious woman in white wanders through the forest, leaving death in her wake. A terrifying black car - its driver invisible - carries the victims into the heart of the night. Every road sign points to a destination they never reach. The survivors succumb to panic, to madness; deeply buried secrets burst to the surface, and Christmas turns into a living hell. Jean-Baptiste and Fabrice Cortes' ''Dead End'', starring Alexandra Holden, Billy Asher, Amber Smith, Lin Shaye, Ray Wise, Mick Cain, Sharon Madden, is a savagely funny, nerve-shredding, black-as-night portrayal of an ordinary family torn apart. The Harringtons will never have lived so intensely as when they're just about to die.