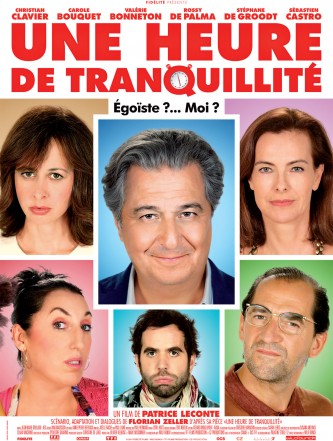 Short synopsis : Jazz fan Michel uses every trick in his repertoire to get what he wants: just one hour of peace to listen to his latest find.

Long synopsis : When passionate jazz fan Michel finds a rare album at a flea market, he can’t wait to listen to it – at home, on his own – but the whole world seems to be ganging up to prevent him from doing so. His wife picks this moment to make an unwelcome confession, his wayward son appears out of the blue, one of his friends drops by announced, and his mother won’t stop calling… Not to mention that today is Neighbours’ Day. Nowadays, is it ever possible not to be disturbed- even for a single hour? Glib and manipulative, Michel will lie through his teeth to get what he wants: in this case, an hour’s peace. Even so, it will take all his energy, cunning and powers of deception to keep his sunny morning from degenerating into a nightmare. Starring Christian Clavier (Serial (Bad) Weddings, Asterix & Obelix: Mission Cleopatra, The Visitors), DO NOT DISTURB marks the return of Patrice Leconte to his favoured genre - comedy.