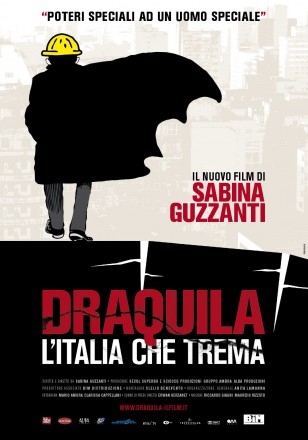 Short synopsis : Why do Italians vote Berlusconi? The violence of propaganda, the impotence of citizens, questions of the economy, illicit power relationships... And a catastrophe: the city of L'Aquila devastated by an earthquake... all these combine to show how the young Italian democracy has been subdued.

Long synopsis : A journalist friend of mine one day tells me “I met a guy who was telling very strange stories about L’Aquila. I didn’t really understand what he was getting at but I told him to talk to you because it seems like your kind of thing..” And she wasn’t wrong. It was July, the G8 was about to begin and I decided to meet the man in question. However the entire city was under tight security and venturing in meant being stopped by armed guards every three metres. So I decided to bide time and wait till’ the days of political visits from around the globe subsided. A while later, at the end of a show, my two friends and I headed off to Aquila from Arezzo. The man who said the “strange” things that would have supposedly been of interest to me was at “home” in one of the Camps. It was an amazing evening, being there in the midst of them all, some of the kids did impressions of their teachers in exchange for my mimics of Berlusconi. The jolly ambiance started to take a more serious tone when they all started to talk about their thoughts and experiences. What really struck me was the unlimited adoration and gratitude for all the volunteers and fire men yet a sense of distrust and fear regarding the managers of Protezione Civile (the national body in Italy in charge of the anticipation, prevention and management of extraordinary events). I started to observe what was happening: Here was a population, the greater part being elderly people and desperate families, yes, but they considered themselves lucky in the circumstances. And a population who complained, fearful and suspicious. Some of them took part in Citizen Associations and strained to have their voices heard, and understood. Some of the rebels said “Here, they’re doing an experiment. What’s happening here is what they want to happen in the whole of Italy.” I became open to suggestions and it was overwhelming the feeling that I was experiencing live what the rest of Italy was discovering through the newspapers. What I was learning about the Protezione Civile was something huge, incredible. We were becoming aware of a parallel state that was growing without anyone knowing about it. The censuring of information in Italy is a common subject. Of course, the censuring covers operations just like this. Censuring, along with the constant threat of dismissal for who expresses dissent. Why do Italians vote Berlusconi? The violence of propaganda, the impotence of citizens, questions of the economy, illicit power relationships... And a catastrophe: the city of L'Aquila devastated by an earthquake... all these combine to show how the young Italian democracy has been subdued.