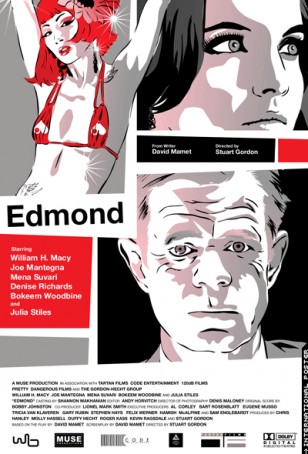 Long synopsis : ''You are not where you belong,'' says the fortune-teller. Thus Edmond begins his brutal descent into a hilarious and horrifying contemporary urban hell in David Mamet's savagely funny black comedy. The encounter with the fortune-teller has caused bland businessman Edmond (William H. Macy) to confront the emptiness of his life and marriage. Appalled, he flees the safe boredom of his home into the vortex of the City's darkest streets, plummeting into a free fall he mistakes for liberation. To Edmond's surprise, it's dark outside: hookers are expensive, pimps are violent, and the guy running a three-card monte game on the sidewalk is a conman. Edmond is robbed, beaten and left bewildered. But there's a strange comfort at the bottom. Exhilirated by a random, bloody act of violence, Edmond picks up a waitress, Glenna (Julia Stiles), but their riotous sex play leads first to conversation, then to murder. With nothing to lose but his liberty, Edmond spirals further out of control, towards prison, personal disintegration, and a most brutal redemption. ''Every fear hides a wish. I think I'm going to like it here.''