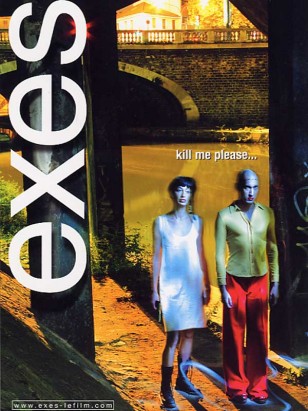 Long synopsis : A wave of savage and bizarre murders is drowning Paris in terror and blood. Six characters are ensnared in a web of death and deception, caught up in a nightmare vortex in which sexual identity, history and truth are torn apart. Virginie: a successful novelist haunted by a secret. David: a mysterious wheelchair-bound surgeon, and Virginie's confidante. Benjamin and Claire: two cops on the trail of the serial killer. It's her first case, it's his last. Their only clue: in each victim's mouth, the fragment of a printed page describing the method of death in exact, agonizing detail. Pages torn from a book written years earlier by Virginie's troubled brother Vincent, now long dead by his own hand. Song: an androgynous deaf-mute Eurasian. And Exes. Compelled to enact the perverted, murderous actions of Vincent's book, Exes is at first sight a monster, a brutal death machine incapable of remorse, betraying not the slightest trace of human feeling. But nothing is as it seems. Has Virginie been straight with the police? Have the horrors of the case driven Claire to a complete nervous collapse? And what is Exes - man or woman? Tormentor or tormented? Psychopath or phantom? Dreamlike, relentless, shot through with a poetic beauty and nerve-shredding brutality, visionary director Martin Cognito's hallucinatory thriller lures the viewer into a world where reality itself is savagely undone.