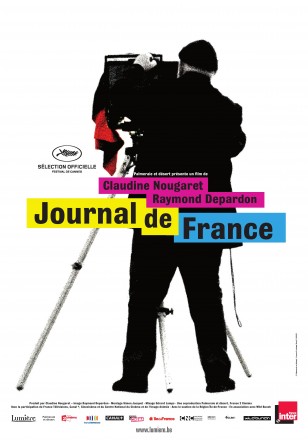 Short synopsis : A journal, a voyage through time. He photographs France, she rediscovers the unseen footage he has so carefully kept: his first steps behind the camera, his TV reports from around the world, snatches of their memories and of our history.

Long synopsis : Travelling alone, internationally acclaimed photographer and filmmaker Raymond Depardon spent six years capturing his home country with a large format camera. This long, solitary road trip provided fertile ground for the creation - with his long-time partner and collaborator Claudine Nougaret - of a remarkable travel journal. The journey returned Depardon to important places from his past as a reporter - Chad, Venice, Cannes - and to a wealth of previously unseen footage from his archive: an interview with Jean-Bédel Bokassa, film of Jean-Luc Godard, extraordinary glimpses of private and public life. Intimate, compelling, revelatory, JOURNAL DE FRANCE offers a unique portrait of a country and its landscapes, an overview of a truly illustrious career and a fascinating resume of the development of the photographic art over the past half-century.