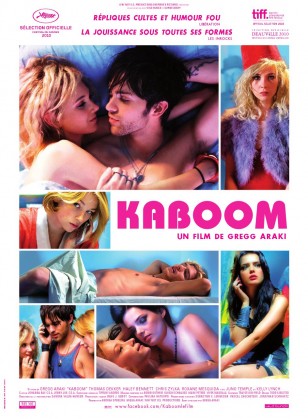 Short synopsis : A hyper-stylized TWIN PEAKS for the Coachella Generation, featuring a gorgeous, super hot young cast, KABOOM is a wild and sex-drenched horror-comedy thriller that tells the story of Smith, an ambisexual 18-year-old college freshman who stumbles upon a monstrous conspiracy in a seemingly idyllic Southern California seaside town...

Long synopsis : Smith’s everyday life in the dorms - hanging out with his arty, sarcastic best friend Stella, hooking up with a beautiful free spirit named London, lusting for his gorgeous but dim surfer roommate Thor - all gets turned upside-down after one fateful, terrifying night. Tripping on some hallucinogenic cookies he ate at a party, Smith is convinced he's witnessed the gruesome murder of an enigmatic Red Haired Girl who has been haunting his dreams. What he discovers as he tries to find out the truth leads him deeper and deeper into a mystery that will forever change not only the course of his young life but the destiny of the entire world.