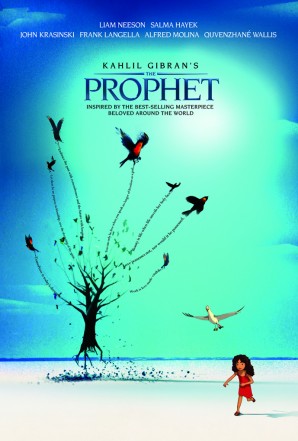 Short synopsis : Inspired by the classic book by Kahlil Gibran, The Prophet is an animated feature film written and directed by Roger Allers (The Lion King), with “chapters” from award-winning animation directors from around the world, and featuring worldclass musicians, singers, and composers.

Long synopsis : On the fictional island of Orphalese, a mischievous, eight-year-old girl, Almitra, meets Mustafa, a political prisoner under house arrest. From this chance encounter, an unlikely friendship is born. But on this fateful day that they meet, Mustafa is told by the authorities that he is finally being released—and guards immediately escort him towards the ship that will take him back to his own country. Along the way, Mustafa shares his wisdom and poems with the people of Orphalese, while Almitra secretly follows him. At each stop, she imagines breathtaking visual sequences that accompany his words. When Almitra realizes, however, that the authorities have a very dark surprise in store for Mustafa, she must do everything possible to help him.