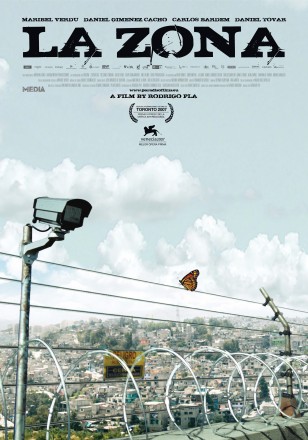 Long synopsis : Teenager Alejandro lives in The Zone, an enclosed, residential haven of wealth and privilege in the middle of Mexico DF, protected by private security guards, surrounded by shocking poverty. In the early hours of his birthday, three kids from the slums break into one of the Zone’s houses. In the bungled robbery that follows, an old woman is killed, but her housemaid escapes and warns security. The guards take swift, brutal action: two of the young intruders are shot dead. The third - Miguel - escapes and flees deeper into the Zone. A group of resident's meet at Alejandro's family home, and quickly decide not to report the event to the authorities, but to track the intruder down themselves and administer their own justice. The manhunt begins. The Zone's residents - adults and children alike - are caught up in a show burning frenzy of fear and simmering violence. Dissenters are treated at first with suspicion, then with naked hostility While fetching a gun for his father from the cellar, Alejandro encounters Miguel, but cannot bring himself to turn the terrified fugitive in. Actino on a tip-off, police from the outside investigate the robbers' disappearance, but the residents stonewall them. Violent paranoia flares in the Zone. Miguel swears to Alejandro he has never killed anyone; and an uneasy complicity develops between the boys. Confused, his allegiances torn, Alejandro allows him to flee the cellar. But the net is tightening.