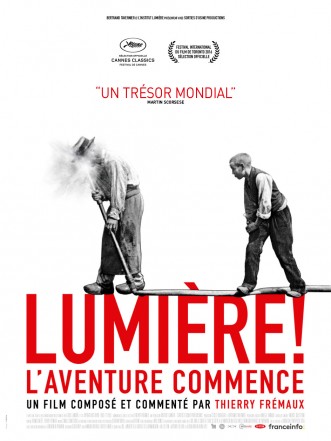 Short synopsis : A journey into the universe of the founders of cinema, narrated by Frémaux with passion and humour, LUMIÈRE! delivers unforgettable images and a unique view of France and the world at the dawn of the modern era; truly essential films that illuminate the world of contemporary filmmaking.

Long synopsis : In 1895, Louis and Auguste Lumière invented the Cinématographe and shot some of the very first films in the history of moving pictures: Workers Leaving the Lumière Factory, Tables Turned on the Gardener... With their discovery of mise-en-scène, tracking shots and even special effects and remakes, they also invented the art of cinema itself! From among more than 1,400 of their films, Thierry Frémaux, director of the Cannes Film Festival and the Institut Lumière, has selected 114: universally celebrated masterpieces or previously unknown golden discoveries, restored in 4K and assembled to celebrate the legacy of the Lumières.