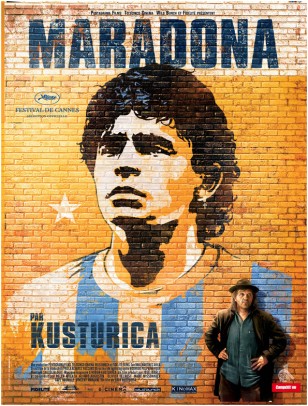 Long synopsis : Renowned multi-award winning director Emir Kusturica directs a celebration of the extraordinary history and phoenix-like resurrection of Diego Maradona: sporting hero, people's champion, fallen idol and inspiration to millions. Enjoying unprecedented access to the man himself, as well as to extensive archives, Kusturica takes the audience on an intimate whirlwind tour of places and people closest and most important to this god of football. From Argentina to Naples, from Cuba to Barcelona; from family and childhood friends to fellow players (LIONEL MESSI) and world leaders (Fidel Castro), MARADONA traces the great man's incredible story, from the humblest of beginnings to world-domination; from spectacular, tragic fall to glorious rebirth. Revisiting the sites of past triumphs, returning to the place of his birth for the first time in TWO DECADES, celebrating his forty FIFTH birthday in joyous and extravagant style, coaching young players of the future, pursuing his burgeoning and deeply committed political activism, accompanied at all times by Kusturica's visionary camera, Diego Maradona is revealed in all his complex, passionate humanity. Profoundly moving, joyous and life-affirming, featuring an original score from Manu Chao, MARADONA is both a unique documentation of a growing friendship between director and his subject and a passionate exaltation of a true legend of our times.