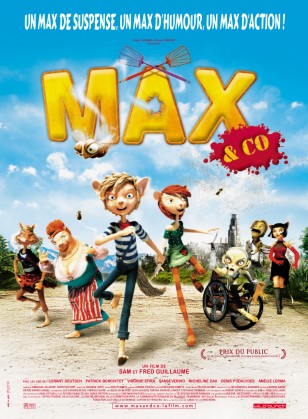 Long synopsis : 15-year-old Max sets off for Saint-Hilare in search of his father, the famous troubadour Johnny Bigoude, who disappeared shortly after Max's birth. He is waylaid by Sam, a rascally fairground entertainer, and introduced to the delights of the amazing Fly Swatter Festival. When he finally gets there, Saint-Hilaire turns out to be the private kingdom of Bzzz & Co., infamous manufacturers of flyswatters, run by the degenerate Rodolfo. Musical virtuoso Max makes a big impression, especially on smart, lovely, resourceful Felicie, who convinces Rodolfo to hire him... Horrified by Rodolfo's calamitous mismanagement of Buzz and Co., the shareholders bring in a ruthless new manager, and Martin - an eccentric scientific genius. Draconian measures are imposed: massive redundancies, a ten-fold work rate increase... and a publicity campaign overseen by the golden voiced sorceress Cathy. The town's carefree way of life is replaced by a harsh new regime - a revolution accompanied by a mysterious plague of flies that signals a series of calamities... Terrible things are afoot, but only Max and Felicie seem to notice. What secret, sinister work is Martin up to, locked away in his lab? What are those mysterious lights that shine from the Buzz & Co. building? And where is Johnny Bigoude? MAX & CO is a fantastic fairytale adventure, beautiful, strange and captivating, utilising radical and unique stop animation techniques, conceived, designed and brought magically to life by a team of the world's very finest contemporary animation and cinematic fantasy talents, whose collective credits include CORPSE BRIDE, CHICKEN RUN, TOY STORY and MARS ATTACKS!.