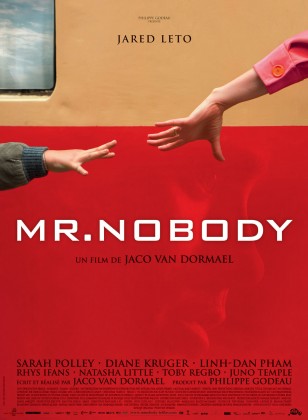 Short synopsis : A young boy is standing on a station platform. The train is about to leave. Should he go with his mother or remain with his father? An infinity of lives rests on his decision. As long as doesn't choose, anything is possible. Every life deserves to be lived.

Long synopsis : NOTHING IS REAL. EVERYTHING IS POSSIBLE. Nemo is 35, an ordinary man, married to Elise, with three children. But life's turning strange: billboards flash messages addressed only to him; on the streets, he passes strangers with his face; behind the facade of a half-constructed building, helicopters lift enormous blocks of the ocean... Nemo wakes, trapped in his car, drowning. He wakes and is shot by an unknown assassin. He wakes again, by a swimming pool in the grounds of a mansion. With a new wife and new children... The year 2092. Science has rendered natural death obsolete. But in hospital, as the world's media looks on, a 120-year-old man is dying. Nemo, the last mortal on earth. Under hypnosis, fragments of his past begin to emerge. Nemo is 8. Occasionally, he dreams of the future; occasionally his dreams come true. In his hometown live three little girls, Anna, Elise and Jean. Life offers infinite possibilities, and as long as Nemo does nothing, anything can happen. But when his parents split up, he's forced to choose. His life divides, he plunges headlong into a world where nothing happens by chance, yet nothing can be foreseen. A universe where the beating of a butterfly's wings in Japan can cause storms on the other side of the globe. Years pass. In England, 16-year-old Nemo falls for Elise, and when she rejects him, pursues Jean. Halfway across the world, another Nemo falls in love with Anna, daughter of his mother's lover. It's the love of a lifetime. Their clandestine affair is joyous, their days and nights blissful, until his mother and her father part and Anna vanishes from Nemo's life. Adolescence passes into adulthood. One Nemo lives with Elise. He is paralyzed by fear. Another Nemo, married to Jeanne, has achieved everything he dreamed of but none of it matters. The third waits for Anna. Every day, they pass through the same train station, kept apart by an ocean of 27 minutes. Until a random death reunites them.