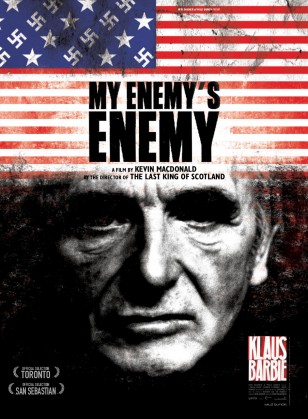 Long synopsis : ''My Enemy's Enemy'' is an uncompromising, troubling and provocative journey into the terrible history of Klaus Barbie, the former Gestapo commander who terrorised Lyon and the surrounding region from November 1942 to August 1944. This dark voyage, rife with government conspiracy and bloodshed, culminates in Barbie's infamous 1987 trial when he is finally forced to face justice for his role as a perpetrator of Hitler's final solution. We follow Barbie - known as The Butcher of Lyon for his hand in the torture and murder of hundreds of civilians - as he turns from Nazi war criminal to American counter-intelligence officer working for the very nations that once pursued him. Despite the heinous war crimes for which his many victims sought justice, Barbie's new-found western allies hold off the hand of justice in exchange for his invaluable skills in quelling rebel organisations and obtaining military intelligence in their fight against communism. As Barbie roams the world freely, from Europe to South America, facilitating military operations from the deportation of 44 innocent children to the Nazi death camps of Auschwitz, to the capture and execution of national resistance heroes Jean Moulin and Che Guevara, we can only wonder at the extent to which this single man, used by his enemy against his enemy's enemy, was able to change the shape of the world we live in today. In the analysis of some of the most controversial events of recent history, we uncover the terrifying reality behind wartime politics: for governments, justice is a notion that applies only to the ''people''. In a world of extremity, democracy and freedom are built on the backs of facists and totalitarians. In the tradition of ''The Fog of War'', ''Hotel Terminus'' and ''One Day in September'', Kevin MacDonald blends striking debate, wit, and visual panache in his quest to reveal the truth behind the chilling contradictions in Nazi Klaus Barbie's tumultuous military career and underline the horrific reality of a world run by political leaders determined to expand the military success of their nations at the expense of delivering justice to their citizens.