NAUSICAA OF THE VALLEY OF THE WIND 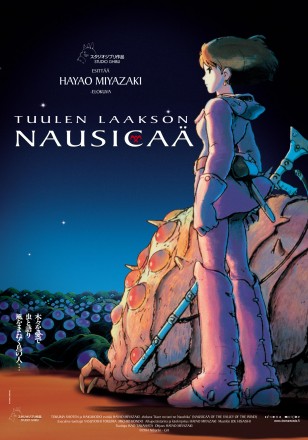 Long synopsis : Seven days of fire had all but completely destroyed the world as we know it. The barren earth became home to giant mutant insects and enormous poisonous, spore-exhaling fungi. The planet was dominated by a giant toxic Sea of Corruption. Scattered throughout the tiny parcels of land remaining at the edges of The Sea of Corruption small warring kingdoms seek to annihilate each other. The Valley of the Wind, a kingdom of barely 500 people who lead frugal but happy lives, are granted frail protection against the poisons of the sea by ocean breezes. Nausicaä is the daughter of Jihl, their ruler. She rides on her wind rider and flies like a bird. She has a mysterious affinity with nature, and can communicate with the huge insects, Ohm, that guard the toxic wastelands. The peace of the Valley of the Wind is shattered when the battle for dominance over the earth’s last lands spills over into the kingdom of Jihl. Nausicaä must race against time to stop the two sides from using their weapons of mass destruction, a giant robot soldier and the indestructible raging masses of giant Ohm. In his first independent feature length animated film, Hayao Miyazaki has created an intricately imagined and stunningly depicted eco-fable. It is a brilliantly realized tale of a young girl’s struggle to survive in a world of ecological disaster brought on by human greed.