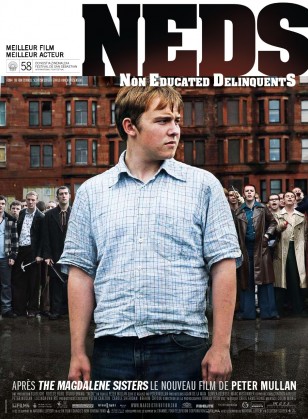 Short synopsis : Young John McGill’s about to start secondary school. He’s a bright, sensitive boy, eager to learn, but the cards are stacked high against him.

Long synopsis : “If you want a Ned, I’ll give you a fucking Ned!” Glasgow, 1973. On the brink of adolescence, young John McGill’s about to start secondary school. He’s a bright boy, a sensitive boy, eager to learn, but the cards are stacked high against him. The McGill family’s dirt poor, his hated father’s a drunken bully. His teachers – punishing John for the ‘sins’ of his older brother Benny – are down on him from the start. John’s on his own. And then there’s the gangs. The Neds. Non-Educated Delinquents. The bad boys with weapons and attitude: cheap drugs, glam rock, fumbling sex, the violence and the camaraderie of the streets. Local monsters. Local heroes. Benny’s fearsome reputation buys John protection, and then a way in. Scared, resentful, full of rage, John makes his decision. If no one else will give him a chance: fuck them. John takes to the savage life of the streets with a vengeance. But as his rage and frustration spin him further and further out of control, he is left facing a blank wall. No future. With one extraordinary chance of redemption.