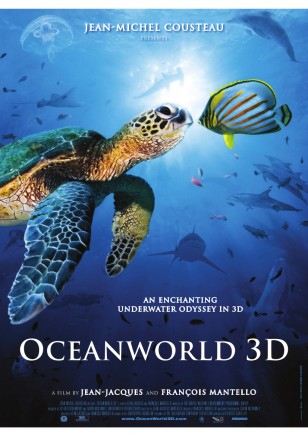 Long synopsis : OCEANS 3D: INTO THE DEEP is the first feature-length docu-fiction film shot entirely in Digital 3D. A unique experience, the film is a tribute to the ocean. Thanks to Digital 3D technology, viewers will literally dive into the virtually unknown deep blue. It is estimated that less than 1% of the world's population has ever visited the underwater world (source: PADI). The film will leave audiences in awe of the beauty and diversity of the oceans - the source of all life on our planet - and inspire an even stronger desire to protect what they have either seen for the first time or re-discovered. In the company of their guide the Sea Turtle, they will enjoy an up-close look at this infinitely rich and fragile ecosystem. Viewers will be taken on a voyage through, among others, Californian kelp forests, the Great Barrier Reef in Australia, and Mexico's Roca Partida, home to thousands of sharks. They will witness some of the most spectacular and unforgettable scenes of life beneath the waves ever captured: the manta ray's enchanting ballet; the noble procession of hammerhead sharks; the lionfish's relentless hunt; a group of young dolphins playing algae-football; the astonishing beauty of the Spanish dancer sea slug and leafy sea dragon; and a unique encounter with the largest cetaceans on the planet.