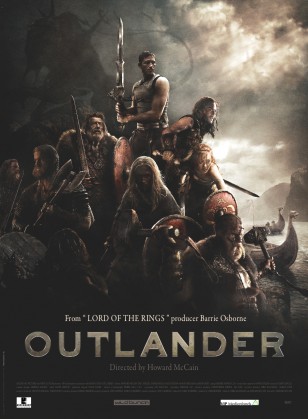 Long synopsis : The Age of the Vikings. King Halga is dead. His son, Wulfric, lacks the wisdom to lead his people; his newly-crowned brother Rothgar lacks the courage. A spaceship crashes to Earth. It seems the only survivor is Kainan, a humanoid warrior. But unwittingly he has carried with him a deadly stowaway - the Moorwen, a savage and monstrous creature hell-bent on avenging the death of her race at the hands of Kainan’s army. Knowing and fearing the Moorwen’s power, Kainan sets out to destroy her, but is captured by the Vikings. Accepted into the clan after saving Wulfric’s life, Kainan confides in Rothgar’s beautiful daughter Freya that he lost his wife and family to the fearsome Moorwen. Mad with rage, the vengeful beast will attack again and again. She must be stopped. The Moorwen besieges the Viking stronghold and is revealed in her awesome and terrifying splendour - massive, armour-plated, lethally taloned, death-dealing jaws snapping. Trapped, the monster is set ablaze and screams in agony. Her howls are answered by those of another - her child. The beasts escape into the forest, leaving King Rothgar dead in their wake. Wulfric is declared his successor. After Moorwen returns and snatches Freya, the Vikings, led by Kainan, set out on their final, desperate mission - to slay the monsters or face destruction.