PONYO ON THE CLIFF BY THE SEA 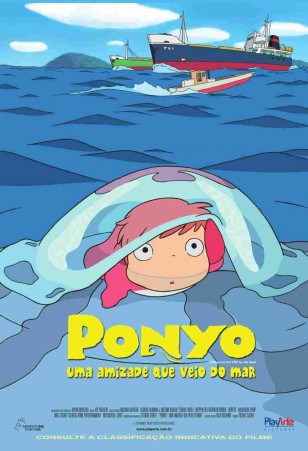 Long synopsis : A small town by the sea. Five year-old Sosuke lives high on a cliff overlooking the Inland Sea. One morning while playing on the rocky beach below his house, he discovers a goldfish named Ponyo, her head stuck fast in a jam jar. Sosuke rescues her and keeps her in a green plastic pail. Ponyo is fascinated by Sosuke. Sosuke feels the same about Ponyo. He tells her, “Don’t worry, I’ll protect you and take care of you.” But Ponyo’s father Fujimoto - once human, now a sorcerer who lives deep under the sea - forces her to return with him to the ocean depths. “I want to be human!” Ponyo declares, and determined to become a little girl and make her way back to Sosuke, she escapes. But before she does, she empties the Water of Life, Fujimoto’s precious store of magical elixir, into the ocean. The sea waters rise. Ponyo’s sisters are transformed into enormous fish-shaped tidal waves that climb as high as Sosuke’s house on the cliff. The chaos of the ocean world envelops Sosuke’s little town and it sinks beneath the waves. A little girl and a little boy. Love and responsibility. The sea and life itself. In an age of nervous anxiety and uncertainty, PONYO ON THE CLIFF BY THE SEA is Hayao Miyazaki’s unreserved depiction of the story of a mother and her child.