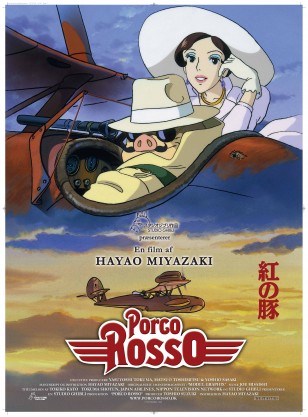 Long synopsis : In the Adriatic Sea in the days after World War I, many out-of-work flying aces have become “sky pirates”, raiding the sea lanes. Marco “Porco” Rosso, is a bounty hunter whose scarlet biplane is available to oppose the pirates, for a fee. Marco is under a mysterious spell of unknown origins that has transformed his face so that it resembles that of a pig. Stirred from a sleepy day at his secluded island hideout, Marco is called on to rescue a group of schoolgirls and a company payroll stolen from a luxury liner. The “sky pirates,” upset by the interruption to their business, decide to bring in the unscrupulous, suave, and handsome American ace Donald Curtis to eliminate Porco Rosso. As Marco dines with the beautiful chanteuse, Gina, whose hotel, bistro and cabaret is the neutral zone where pirate and bounty hunter mingle without incident, Curtis meets his strange nemesis and is struck by the beautiful Gina. Marco and Gina are old friends, but with a hint of romance in the air. Curtis resorts to sneak tactics as he seeks to eliminate Marco and win the fair Gina. Marco’s relaxed attitude towards things like aircraft maintenance nearly do him in, and the Porco Rosso is shot down. Fio, the daughter of the plane’s creator, who has a crush on Marco, assists him to fix the Porco Rosso, but her price is to accompany him back to seek a showdown with Curtis. When Curtis turns his attention to the seventeen-year-old Fio as well, the stage is set. Aerial dogfights of amazing sweep and grace. A lush, Caribbean setting in an age gone by. Humor, courage, pride, skill and love. Porco Rosso is a whimsical tribute to the love of freedom and adventure.