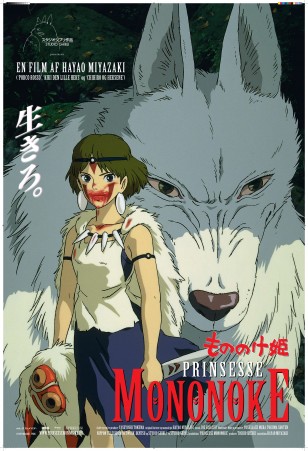 Long synopsis : Set in the Japanese countryside of the lawless and chaotic Muromachi Period, PRINCESS MONONOKE is the story of a young man’s quest to reconcile the powerful forces of human civilization and industry with the need to live harmoniously in the natural world. It is a time when Samurai warriors raid each others’ territories whenever they sense weakness or advantage. Men and women driven from areas of conflict have begun to eke out their livings in even the most remote forests where the gods of old still rule the land. Ashitaka, a young warrior from the Emishi clan, the last remnants of a once powerful people now hidden away in the mountains, is forced to kill a rampaging boar-god who appears one day and threatens his village. Where his arm was touched by the raging demon-god, a strange scar-like mark begins to consume him. If he does not find the source of the boar-god’s madness, the scar will continue to grow larger until it has killed him. Ashitaka sets off on a quest to reverse his fate. Along the way he encounters the girl SAN, called Princess Mononoke by her enemies, Princess of Demons and Spirits, who was raised by wolves, and who has sworn to kill all humans and returns the forests to the gods. Ashitaka encounters samurai who massacre helpless villagers, a wily itinerant Buddhist priest, and a proud village of ironmakers whose leader, the lady Eboshi, would fight against samurai or forest gods to turn her walled fortress of a town into a better place to live. Propelled by his fate, Ashitaka finds himself in the middle of a battle between the forces of greed, progress and nature. His true quest is to find a way for them all to live together in peace.