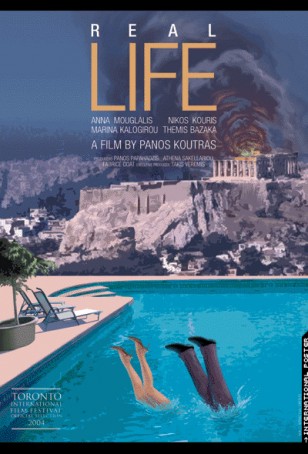 Long synopsis : We are what our families and lives make us. This is the subject of ‘Real Life’: no one escapes destiny. One way or another, the past always recaptures those who have tried to escape it. - Panos Koutras - Aris Kalliga is 27. He has returned to Athens after a long stretch in detox, to the decadent, superficial world he had left behind. His mother - ethereal, eccentric, manipulative, a mainstay of Athens society – lives with Christos, her devoted gardener, in an opulent villa which mirrors her spirit. Imposing, magnificent, yet shadowy, alive with dark secrets. Aris attemps to rebuild himself, to understand and control his self-destructive compulsions. Faces from his past reappear: Nikos, his one-time dealer, a young homosexual who loves him violently. And Joy, his old girlfriend: wealthy, beautiful, addicted to cocaine. Afraid, Aris avoids them. He falls passionately for Alexandra, a designer whose natural simplicity contrasts radically with anything he has ever known. But his neurotic, possessive mother objects. With her help, Joy resolves to get back with Aris. Tormented by the mystery of his father’ death years before, and encouraged by Joy, Aris succumbs to narcotic temptation. His decline is rapid. Mme. Kalliga offers to set Alexandra up in Paris if she agrees never to see Aris again. Persuaded that she is to blame for his relapse, Alexandra accepts. Aris begins his relationship with Joy exactly where they broke off: theirs is a destructive love, mired in shallow luxury. When Christos commits suicide, Mme. Kalliga, devastated by the loss of her lover, reveals a terrible family secret... Alexandra flourishes in Paris. But she is troubled by the choices she has made. She cannot forget Aris.