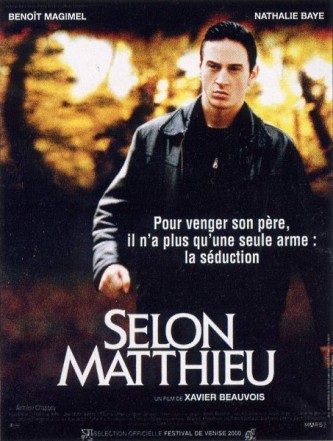 Long synopsis : Set against a pitiless, beautiful Normandy landscape, Xavier Beauvois' consummately directed ''SELON MATTHIEU'', a devastating psychological drama, tells a tragic story of love and obsession; despair and impotent fury. The story of a family pushed to the brink, and a man torn between passion and his desire for vengeance. Francis and his two sons, Eric and Matthieu, are employed in the same factory. Francis has worked there all his adult life, but is sacked for smoking on the job. The old man is discarded: another piece of industrial waste. Horrified by this injustice and outraged by what he sees as his brother's treacherous complacency, Matthieu tries to force the management to reinstate his father, then to mobilize his fellow workers. In vain. Francis is killed shortly afterwards. Convinced that his father was forced into suicide, Matthieu swears to punish the factory owner by seducing his wife, the beautiful, enigmatic Claire. Only as he pursues her through casinos and hotel rooms, only as their relationship deepens then twists, does Matthieu begin to realise that he is trapped.