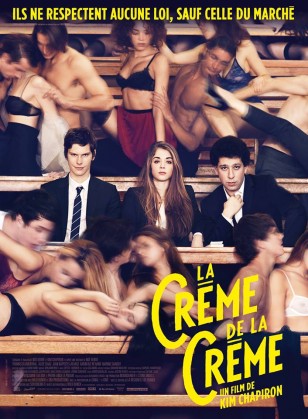 Long synopsis : On the first day of term, the dean of their prestigious business school tells his students: “You are the elite… the crème de la crème. Soon the rules of a market economy will no longer be a mystery to you. Learn, work and apply.'' Kelly , Dan and Louis take him at his word. Starting from the theory that relationships between the sexes can be regulated according to market principles, the three sophomore classmates begin to inflate the popularity of certain students artificially, by hiring beautiful off-campus women as their dates for exclusive and riotous college parties. The perfect business model, their concept takes off like a rocket, surpassing its founders’ wildest expectations. Soon they find themselves confronting the problems of rapid growth. And then the system truly takes on its own velocity, quickly escaping their control… After all, they’re barely more than kids… and wasn’t it all just a game anyway? Funny, troubling and touching, a powerful Generation Z coming of age story from director Kim Chapiron (SHEITAN, DOG POUND).