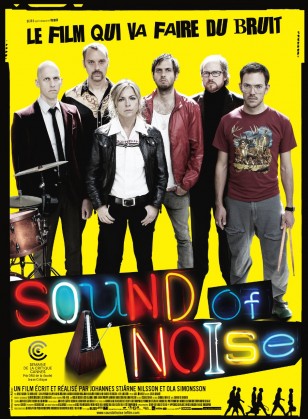 Short synopsis : Police officer Amadeus Warnebring was born into a musical family with a long history of famous musicians. He hates music. His life is thrown into chaos when a group of six excentric drummers decides to launch a musical attack using the city as their instrument. To capture the serial musicians, Warnebring must enter the world he has spent his entire life fleeing - the frightening world of rhythm and music.

Long synopsis : Police officer Amadeus Warnebring has suffered his whole life from an allergy to music in all its forms. His bizarre condition has resisted every medical investigation and remedy - even the slightest hint of a melody remains torture for Amadeus. His existence is thrown into chaos when a gang of delinquent sonic terrorists, led by beautiful revolutionary genius Sanna, decides to enact a full-scale musical assault in the name of anarchy and freedom, using the city - its buildings, its machinery, its ceaseless noise - as their orchestra. Their first piece is performed in hospital, on the anaesthesized body of a hateful TV star. Warnebring is called in, and thus begins a surreal investigation which will plunge our reluctant hero into the world he has spent his entire life fleeing... the world of music. The more Warnebring discovers, the deeper the enquiry takes him, the more disturbing and inexplicable the world around him becomes. Is he losing his mind? As he struggles to retain control over events and himself, the gang mounts a second ?attack?: a Hip Hop concert played in a bank and involving the destruction of huge sums of cash. Their next aim is the musically-interpreted destruction of the opera house where Warnebring?s conductor brother is due to perform. When the assaults threaten members of his own family, and when he realizes that the young woman with whom he has fallen in love and the leader of the sonic terrorists are one and the same, Warnebring is left with no choice. If he is to stop Sanna, he must confront his worst nightmare - and enter the world of the musician himself. Inspired by their internationally acclaimed, multi award-winning short MUSIC FOR ONE APARTMENT AND SIX DRUMMERS, SOUND OF NOISE is the first feature from Swedish directors Simonsson & Nilsson.