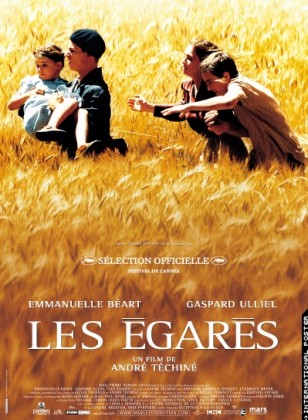 Long synopsis : June 1940. German troops are advancing on Paris. Odile, a widowed teacher, succumbs to the widespread panic and, with her two children, joins the exodus from the city. Philippe is on the cusp of adolescence, Little Cathy knows only that they are going South. After fifty kilometres, a German plane attacks, decimating the helpless refugees. Odile and her children lose everything. A shaven-headed youth appears from nowhere and leads them away from the carnage. His name is Yvan, he's seventeen years old. Should they follow him into the forest or risk returning to the bloody road? Yvan finds an abandoned house and breaks in. Philippe and Cathy are transfixed. Reluctantly, Odile follows. Here, with no radio and no clocks, cut off from the outside world, struggling to survive, the four characters will come slowly to know each other and move inexorably beyond their limits. Odile does not trust this wild, illiterate youth, who lies constantly but takes care of them. Yvan is a 'black angel', a feral presence revelling in the chaos that threatens to engulf them, provoking fear, longing, dread, desire... Surrounded by untamed nature, in the hot glow of a perfect summer, Odile feels her control starting to slip. Then Yvan is arrested. Odile will never see him again.