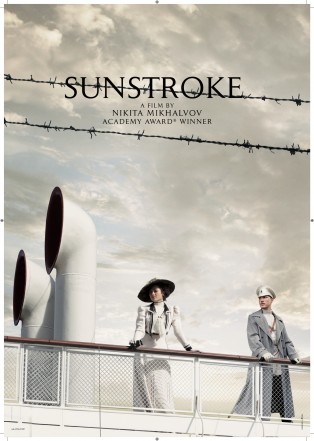 Long synopsis : 1920. The final days of Imperial Russia: the Communist revolution is underway. The last soldiers loyal to the Tsar are held in a prison camp awaiting Moscow's decision regarding their fate... The Lieutenant recalls his encounter, years before, with a beautiful and enigmatic woman. During the course of a steam boat journey their paths crossed briefly. The Woman was married, and The Lieutenant himself engaged, but despite every obstacle, the attraction was overpowering. Their 'sunstroke', as they called it, led them into a night of passion, a single night of such sensual intensity that The Lieutenant remembers it to this day, even now clinging to this memory of an opulent Russia and a better life... Academy Award® winning director Nikita Mikhalkov delivers an epic saga, skillfully moving from laughter to tears, from lightness to intense drama, told through a cavalcade of colourful and touching characters, painting a dreamlike and magnificent portrait of Russia recalled during the glory days before its fall. A film firmly in the tradition of Visconti's The Leopard.