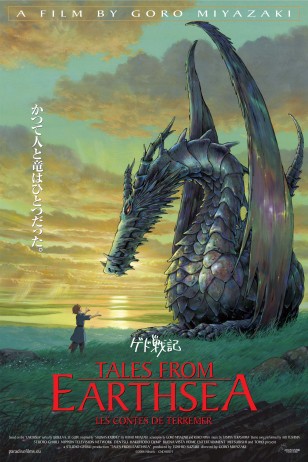 Long synopsis : A ship is tossed on the rough sea. The captain orders a weather-working magician to calm the waves, but the man is unable to remember the true name of the sea and the gale continues to rage. Two dragons appear from the storm clouds and devour each other. For Western dragons to appear over the eastern ocean and feed on one another is an omen of something unthinkable. The balance of the world is collapsing. Sparrowhawk (Ged) is on a quest, searching for the evil source of the disturbances that are shaking the world. Once an impetuous goatherd, he is now Lord Archmage, the greatest of wizards. On his travels he meets Arren, Prince of Enlad. In flight from his Shadow and unable to confront his own inner darkness, Arren is a mirror of Sparrowhawk in his younger days. They travel together, through vast ruined landscapes, mountains, valleys and abandoned farmsteads, before arriving at Hort Town. The city is in chaos: craftsmen have forgotten their skills and deal only in fake goods; slaves are openly bought and sold; hazia addicts throng the dangerous backstreets. The citizens rush crazily back and forth, but with no purpose, their blank eyes fixed on distant dreams, headed only for death. Sparrowhawk and Arren seek refuge with Tenar, a former priestess of the dark Tombs of Atuan. When Sparrowhawk recovered the broken Ring of Erreth-Akbe from the Tombs, he delivered Tenar into the world of freedom and light. Also living on Tenar’s farm is Therru, an orphan girl with a fire-scarred face. Arren spends his days labouring in the fields, interacting with nature and learning from Sparrowhawk how the universe depends on balance. Therru gradually opens her heart to the young prince, but he remains haunted by fear of the Shadow that is pursuing him. Sparrowhawk learns that a wizard named Cob, in his search for eternal life, has opened the door between the worlds of the Living and the Dead, and that this transgression has triggered the world’s imbalance. Once called Cob of Havnor, the magician is an old and previously defeated adversary of Sparrowhawk’s who has sworn to take a terrible revenge. Arren leaves Tenar’s farm, terrified that he can no longer control his violent ‘other self’. Fleeing his Shadow, he is taken captive by the wizard, given the powerful drug hazia, and loses his mind... Sparrowhawk and Therru both risk their lives to bring Arren back to his senses. With their help, he overcomes the temptation of eternal life and, armed with a magical sword, faces Cob in final combat.