TALES FROM THE GOLDEN AGE 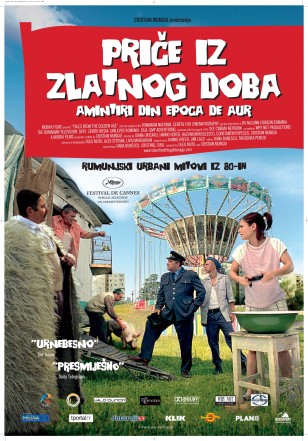 Long synopsis : The final 15 years of the Ceausescu regime were the worst in Romania’s history. Nonetheless, the propaganda machine of that time referred without fail to that period as “The golden age”... TALES FROM THE GOLDEN AGE adapts for the screen the most popular urban myths of the period. These comic, bizarre, surprising stories drew on the often surreal events of everyday life under the communist regime. Humor is what kept Romanians alive, and TALES FROM THE GOLDEN AGE aims to re-capture that mood, portraying the survival of a nation having to face every day the twisted logic of a dictatorship. On the occasion of Ceausescu’s working visits, countryside mayors ended up hanging fruit in trees to make sure their villages would be noticed, obeying even the strangest orders from the ferocious Party activists. Communist Party secret regulations stated that in official pictures President Ceausescu couldn’t take his hat off in front of the representatives of the rotten capitalistic world, President d’Estaing included. A professional driver decides to open his sealed truck for the first time in his career and discovers the connection between eggs, Easter and marital love. A policeman gets a live pig as gift before Christmas and decides that gas poisoning would be the best way to kill the animal silently amongst his hungry neighbors. In 1980s Romania, Bughi and Crina play Bonnie and Clyde, robbing people of bottled air. TALES FROM THE GOLDEN AGE combines several true stories to portray an era during which food was more important than money, freedom more important than love and survival more important than principles.