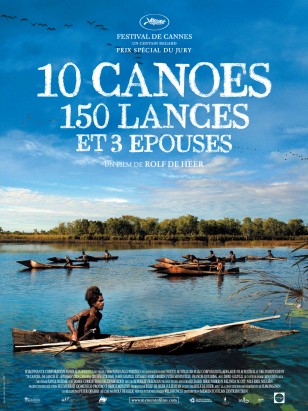 Long synopsis : Australia, long, long ago... Tribal times. The indigenous people live as they have done for thousands of years, a community in harmony with the untamed nature that surrounds them. Dayindi, a young warrior (played by Jamie Gulpilil, son of the great Aboriginal actor David Gulpilil) covets the youngest wife of his older brother. To teach him his proper path, an elder tells him a cautionary story from the mythical past - a wild and comic tale of illicit love, kidnapping, sorcery, bungling mayhem and revenge gone wrong. Set in the forests and breathtaking vistas of Australia’s remote far north, told in English (David Gulpilil) and subtitled Ganalbingu language, featuring remarkable performances from its wholly Aboriginal cast, devised and filmed in creative collaboration with the People of Ramingining, Rolf de Heer and Peter Djigirr’s vibrant, powerful and effortlessly inventive TEN CANOES depicts a world and a people at once utterly strange and very familiar to Western eyes and hearts. Rich in earthy humour and powerful emotion, resonantly dramatising the universal themes of desire and temptation, conflict and reconciliation, TEN CANOES is truly a film unlike any you have ever seen.