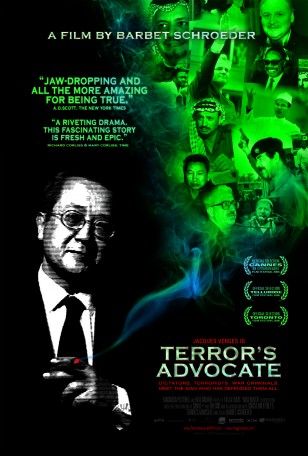 Long synopsis : A provocative, unsettling feature length documentary film by Barbet Schroeder about Jacques Vergès, the highly controversial French lawyer, war veteran, revolutionary agitator and intellectual popularly known as 'The Devil’s Advocate' and reviled as such by his critics for his persistent defence of what many perceive as the indefensible. If a Hollywood scriptwriter had invented Jacques Vergès, he might be open to charges of over-romanticising his hero. Perhaps Vergès should be viewed as an anti-hero because he is a difficult man to like. Many abhor him. Any honest, balanced film about Maître Vergès is bound to be as controversial and provocative as the man himself. This film, directed by Barbet Schroeder, no stranger to disturbing subject matter, will be impartial and straight forward, in the stark tradition of the director whose films like More, Idi Amin Dada and Barfly have taken audiences into dark places many of them would prefer to have avoided. For all his charm and urbanity, Vergès represents a doorway to some very dark places indeed. For more than half-a-century, he has consorted with some of the most infamous figures of the post-WW2 era, including Pol Pot, Mao Tse Tung, Slobodan Milosevic, Saddam Hussein, Carlos the Jackal, Klaus Barbie and other despots, tyrants, mass-murderers, torturers and terrorists of one political hue or another. Some were his clients, others his friends. As a criminal lawyer, Vergès is quite forthcoming about his general motivations. “Evil fascinates me,” he has said, “the more a man is accused the more interested I am.” Vergès contends that crime, or criminality, is what separates men from beasts. He professes great empathy for the world’s “accused”. Who is Jacques Vergès? Moral conscience… or dark shadow? A manipulative, self-promoting, unscrupulous, amoral exploiter of misery as his critics claim, or a sensitive, empathetic defender of human dignity, even when the right to that dignity is claimed by individuals who have denied it to their victims?