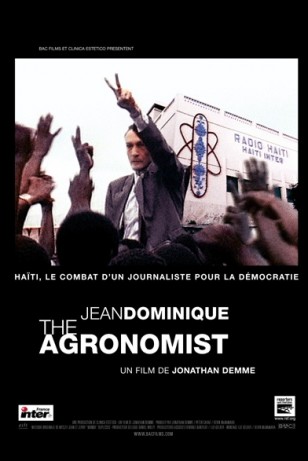 Long synopsis : A long-cherished personal documentary project from Academy Award-winning director Jonathan Demme (The Silence of the Lambs, Philadelphia, Melvin and Howard, Stop Making Sense), THE AGRONOMIST is a celebration of an extraordinary man - journalist, broadcaster and human rights activist Jean Dominique – and his tireless fight against injustice and oppression, the story of his uncompromising crusade for liberty and democracy in the vibrant country of Haiti. Demme shot many hours of footage with Dominique over fifteen years. Their joint project was tragically cut short in April 2000 when, in the turmoil leading up to elections in Haiti, Jean Dominique was assassinated outside his radio station, Radio Haiti Inter. THE AGRONOMIST is not a ‘whodunnit’, as the investigation into Dominique’s murder is ongoing. Rather, it is a portrait of a remarkable man, his extraordinary wife and partner Michele Montas, and their beloved Haiti. Jean Dominique purchased the lease of Radio Haiti-Inter, Haiti’s oldest radio station, in 1968. Prompted by the social and political circumstances of his country, he set about making innovations that revolutionised radio communication in the country. Most significantly, he introduced the use of Haitian Creole, the language of the majority of Haitians, at a time when the French speaking elite had a monopoly on broadcasting. For the first time, all of Haiti’s people could receive the news and disenfranchised socioeconomic portions of the population were empowered to become participants in the country’s political movements. Through his innovations Dominique defined himself as a militant activist for democracy, a stance echoed in his own charismatic reporting. His daily editorials debated vital political questions and spoke freely about controversial issues of the day. He remained a voice for democracy throughout the days of the Duvalier regime that prevailed in Haiti from 1956 until 1986, a vital player in Haiti’s often violent political struggles, both friend and foe to those fighting for power. His outspoken and uncompromising work did not go unnoticed by the dictatorship. Radio Haiti Inter was shut down several times in this period and Dominique forced into exile in 1980 and again in 1991. His return from his first period in exile from 1980-1986 was testimony to his significance to the Haitian people. After six years in Manhattan, a crowd of 60,000 gathered at the airport in Port au Prince to welcome him home and to urge him to continue his battle for democracy. Although his professional life was primarily based in radio, Dominique was by vocation and training an agronomist. His heart remained close to the agricultural majority in the country that he attempted, through his broadcasting, to inform and to draw into political debate and action. In addition, Jean Dominique was passionate about film and is credited with making one of the first Haitian documentaries in the early 1960s. He served as the director of Haiti’s Ciné Club for many years and his film reviews were broadcast in Creole on Radio Haiti. THE AGRONOMIST recounts Jean Dominique’s extraordinary career not only as a true investigative journalist but also as a the director of Haiti’s Ciné Club – interweaving his life and work with the testimonies of family, friends and colleagues who worked together in the fight of the Haitian people against injustice and oppression. Under the guidance of his widow, Michele Montas, Radio Haiti continues to exist as Jean Dominique’s invaluable legacy to his country.