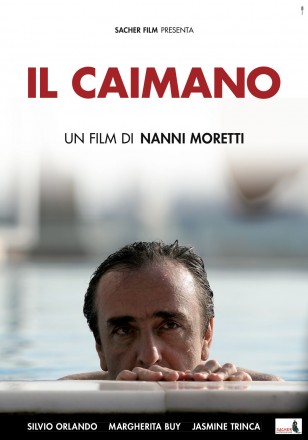 Long synopsis : Bankrupt in his professional and personal life, Z-grade movie producer Bruno Bonomo – responsible in the past for such evocatively-titled offerings as “Mocassin Assassins” and “Maciste vs. Freud” – is finding it impossible to raise the finance for his latest project, “The Return of Christopher Columbus”. Entangled in debts and his own weaknesses, struggling with a capsizing marriage and his wayward kids, Bruno is going under. By chance, he meets a young director who gives him her script, The Caiman. At first Bruno takes it for a half-hearted thriller; a more careful - if belated - reading reveals a film about Berlusconi. No longer can he stand back. He must set up the production, find the lead actor, sort out the financing of the film – all the while trying to pick up the pieces of his broken relationship. Yet in the midst of endless setbacks and problems, a new spirit is awakened in Bruno Bonomo, and with it, the assertion of his dignity. Washed up as he seems, he finds within himself the desire and the energy to see through to its end this project, which arrived by chance but which now, he sees as a matter of life and death. This man, washed up as he seemed, finds within himself the energy to pursue the project to its end – what came to Bruno as the result of pure chance has become in his eyes a matter of life and death.