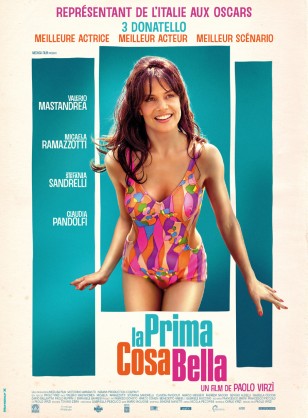 Long synopsis : Summer in Tuscany, 1971. Anna is crowned ‘Queen’ of Livorno’s most famous bath house. Beautiful, vivacious and innocent, she’s unaware of arousing the unwelcome suspicions of her jealous husband Mario, and stoking attentions of the male population, kindling the suspicions of her jealous husband Mario, and stoking the hidden embarrassment of her son Bruno. 20 years la ter, Bruno is persuaded to return to Livorno by his estranged sister Valeria. To help Anna - still a beautiful object of desire despite a terminal illness. And to confront the childhood memories he has tried to erase at all costs. Humiliation. Confusion. Endless wanderings in search of somewhere to live after having been thrown onto the streets by their father. Yet always swept along by Anna’s unshakable optimism. THE FIRST BEAUTIFUL THING is a funny, tender and moving tragicomedy played out against the backdrop of provincial Italy, its small-town mentality embodied in the men who’d like to take advantage of Anna’s sensual charms, but lack the courage. Secret after secret is revealed, leading to an unexpected reconciliation. A lesson in love and life lived to the full from an unconventional, courageous, irresistible mother.