THE GIRL CUT IN TWO 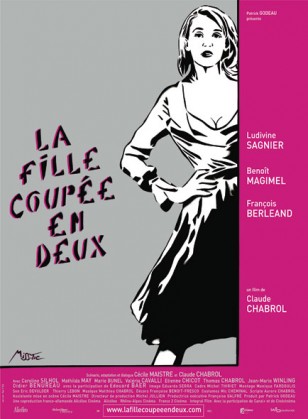 Long synopsis : 25-year-old Gabrielle Deneige lives in Lyon, with her mother, Marie, who brought her up alone, surrounded by books. Witty and charming, Gabrielle has an important job at the local cable station. In the course of an event to promote his latest work, Gabrielle meets the great writer Charles Saint-Denis, who has been living locally for several years. A handsome man in his fifties, brilliant, revered - and married - Charles seduces the young woman straight away. If at first he sees her as nothing more than another conquest, very quickly, he finds he has fallen deeply in love. As does Paul Gaudens, thirty years old, unbalanced and heir to a family fortune. Attractive, impetuous, bi-polar, Paul sets himself to winning Gabrielle. Unimpressed by his charm and his wealth, she rebuffs the hot-headed young man’s advances. Her rejection drives him crazy, so much so that Paul develops a fierce, unreasoning hatred for his rival. Thus Gabrielle finds her destiny inextricably linked to these two men. She will become the mistress of one, and the wife of the other. One will die; perhaps the other will end his days behind bars. Love, licentiousness, guilt, sacrifice, betrayal, break-ups, the burden of the past and bourgeois morality, Gabrielle will be spared none of the brutalities of human relationships. Torn in two, without doubt... but today’s young women are tough.