THE WAR OF THE BUTTONS 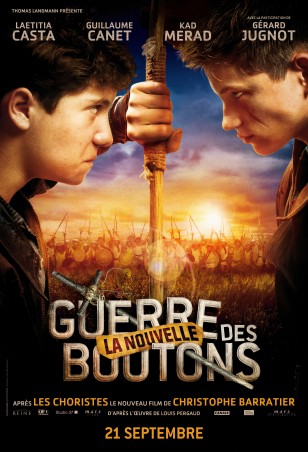 Short synopsis : In a remote corner of German-occupied France, the children of two neighbouring villages play out their own fierce war. A tender, thrilling, funny adaptation of the classic bestseller of the same name.

Long synopsis : While the planet is shaken by the terrible events of World War II, another war is been played out in a remote corner of the French countryside. The children of neighbouring villages Longeverne and Velran have always hated each other. Now their battle takes a new turn: prisoners will have the buttons of their clothes removed and return home almost naked, vanquished, humiliated. The ‘War of the Buttons’ has been declared and whichever village collects the most buttons will be declared the victor. Our story folows Lebrac , a tough, troubled but big-hearted 13-year-old and Longeverne’s‘chief strategist’ and his lieutenants: Top Hat, The Cove and their mascot, Little Hat, an irrepressible 8-year-old who takes part with a hilarious seriousness. The arrival of Violette, a young girl from the city, sets hearts racing, most of all that of Lebrac, and romance follows quickly. But Violette’s appearance raises suspicions: she is of Jewish origins and has taken refuge with her alleged aunt, the beautiful Simone, with whom the village teacher is secretly in love. Will Violette’s background be discovered? Will she be denounced? “The War of the Buttons” tells its story with great tenderness and warmth, but with all the excitement and action of a war movie, set against the rich dramatic background of German-occupied France in 1944. A phenomenal success, Yves Robert’s 1961 film version of Louis Pergaud’s celebrated novel “La Guerre des Boutons” (“The War of the Buttons”) garnered great acclaim and more than 10 million admissions on its French release