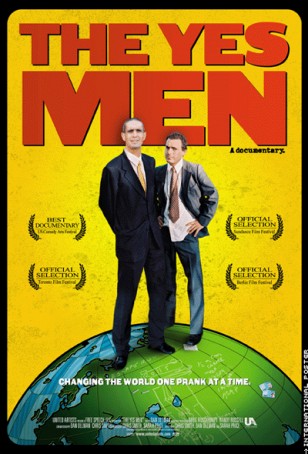 Long synopsis : THE YES MEN follows a couple of anti-corporate activist-pranksters as they impersonate World Trade Organization spokesmen on TV and at business conferences around the world. The story begins with Andy and Mike setting up a spoof website modelled on that of the WTO. Some visitors don’t notice the site is a fake, and send e-mail invitations meant for the real thing. Mike and Andy gleefully play along with the ruse and find themselves attending important functions as official WTO representatives. Delighted to speak as the organization they oppose, Andy and Mike don second-hand suits and set out to shock their unwitting audiences with outrageous, darkly comic satires on global free trade. Weirdly, the experts don’t notice the joke and seem to agree with whatever appalling idea the duo manage to come up with. Exhausted by their failed attempts to shock, Mike and Andy alter their strategy completely, and take a radical new approach for one devastating final lecture. The film contains exclusive interview footage with supporters and activists including Michael Moore. Directed by Chris Smith, Dan Olman and Sarah Price, whose previous credits include the 1999 Sundance Winner American Movie. THE YES MEN will be released by United Artists in North America in the summer of 2004.