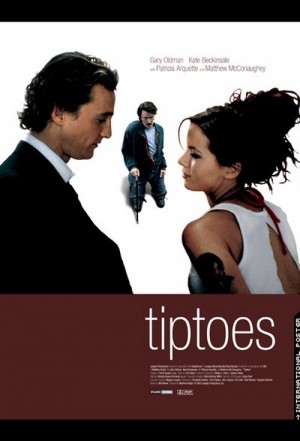 Long synopsis : An outrageously funny, moving and finally life-affirming story of difference, courage and acceptance from the director of “Freeway” and the producers of “Bully”, “Spun”, “The Virgin Suicides” and “Buffalo 66”, “Tiptoes” is a bold and original comedy/drama set against the backdrop of the annual Little People Of America Convention. A young woman, Carol (Kate Beckinsale), discovers she is pregnant, but her boyfriend (Matthew McConaughey) doesn’t want her to have the baby. When she insists, she discovers that he comes from a long line of little people, including his twin brother Rolfe (Gary Oldman) with whom she eventually falls in love. Shocked but determined to keep their baby whatever the risks, Carol enters a previously unsuspected world, where she meets Rolfe’s family, his best friend Maurice, a cynical, foul-mouthed, hard-living French Marxist dwarf (Peter Dinklage) and Maurice’s crazy, “normal sized” girlfriend Lucy (Patricia Arquette). What begins as a free-wheeling anarchic depiction of the difficulties faced by young singles in their search for a life mate soon reveals itself as a brave, big-hearted and very human romantic comedy,not afraid to delve into questions of difference, prejudice and the potentially devastating relationship issues new parents confront when they learn they are going to have a child afflicted with serious and permanent physical handicap.