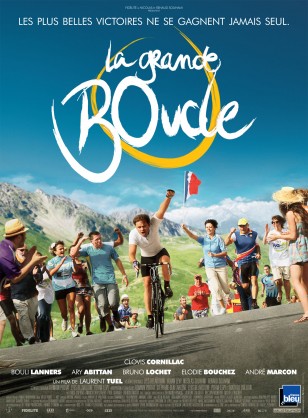 Short synopsis : A 40-year-old nobody decides to live his dream of doing the Tour de France – his way.

Long synopsis : Like millions of others worldwide, 40-year-old François Nouel is a Tour de France fan. Unbeatable on anything to do with the race, he spends as much time as he can on his bike, to escape from a disappointing everyday existence. At work, he’s restricted to bicycle displays. And things at home are no better: his son thinks he’s a loser and his wife berates him for being a coward. So when his wife discovers on the eve of his holidays that he’s been volunteered to work on the Tour, it’s too much: she tells him she wants a divorce and leaves with his son. Then he meets Rémi Pletinckx, a depressive former sports manager who’s also at the end of his rope. Under Pletinckx’s influence, François makes up his mind to live his childhood dream: to do the Tour de France. The race begins tomorrow. If he leaves now, one day ahead of the pros, he could even get to Paris before them. François takes off. Alone at first, others quickly join him, inspired by the challenge he has embraced. The obstacles are many, but as he overcomes them one by one, word of his exploits spreads. A real pack of amateurs grows around him. Each stage is passed, the media goes crazy, the crowds cheer, the Yellow Jersey is furious. François must be stopped. But when all seems lost, when there’s nothing left to hope for, François resolves to go on to the bitter end... has his moment finally come?