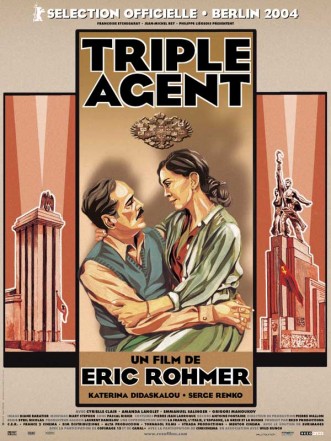 Long synopsis : 1936, and Europe is shaken by the Popular Front and the Spanish Civil War... Fiodor, a young General in the Tsarist army who has taken refuge in Paris, and his Greek artist wife Arsinoé, play their part in the general chaos. While she sympathises with their communist neighbours, he carries out secret missions, delighting in confusing those around him. He makes no attempt to hide the fact that he is a spy, but conceals the identity of his masters. The White Russian anti-communists? Their Soviet counterparts? The Nazis? All of these? Does he even know himself, this man of mystery who loves his wife deeply but appears ready to sacrifice her in the name of a sordid intrigue? Inspired by a story, the truth of which has never been fully explained, TRIPLE AGENT is both a dizzying tale of espionage and intrigue, and a moral story of the nature of concealment and deceit. From one of the masters of French cinema, a thrilling yet painfully intimate epic arising from the place where the private life of a man and a woman collide with the stirrings of global political conflict.