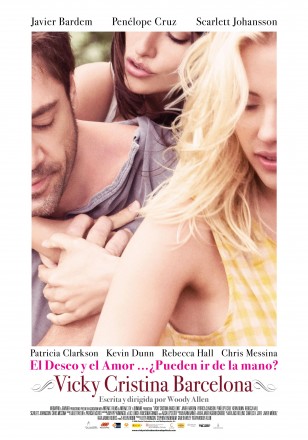 Short synopsis : Two young American women, Vicky (Rebecca Hall) and Cristina (Scarlett Johansson) come to Barcelona for a summer holiday. Vicky is sensible and engaged to be married; Cristina is emotionally and sexually adventurous. In Barcelona, they're drawn into a series of unconventional romantic entanglements with Juan Antonio (Javier Bardem), a charismatic painter, who is still involved with his tempestuous ex-wife Maria Elena (Pen?pe Cruz). Set against the luscious Mediterranean sensuality of Barcelona, VICKY CRISTINA BARCELONA is Woody Allen's funny and open-minded celebration of love in all its configurations.

Long synopsis : Woody Allen’s breezy new romantic comedy is about two young American women and their amorous escapades in Barcelona, one of the most romantic cities in the world. Vicky (Rebecca Hall) and Cristina (Scarlett Johansson) are best friends, but have completely different attitudes towards love. Vicky is sensible and engaged to a respectable young man. Cristina is sexually and emotionally uninhibited, perpetually searching for a passion that will sweep her off her feet. When Judy (Patricia Clarkson) and Mark (Kevin Dunn), distant relatives of Vicky, offer to host them for a summer in Barcelona, the two of them eagerly accept: Vicky wants to spend her last months as a single woman doing research for her Masters, and Cristina is looking for a change of scenery to flee the psychic wreckage of her last breakup. One night at an art gallery, Cristina, true to form, instantly locks eyes on the most intense and provocative man in the room, Juan Antonio (Javier Bardem), a handsome painter. Cristina is only more intrigued when Judy whispers that Juan Antonio had such an explosive relationship with his ex-wife Maria Elena (Penélope Cruz) that one of them tried to kill the other. Later that night, when Vicky and Cristina are having dinner, Juan Antonio approaches their table with a brazen proposition: fly with him for a weekend trip to the provincial town of Oviedo, where he suggests they explore the cultural wonders, drink fine wine, and make love together. Vicky finds his proposal obnoxious, but Cristina is enchanted by his directness and charisma, and persuades Vicky to accompany her. During a day of sightseeing and fine dining in Oviedo, Juan Antonio speaks in reverential terms about the magnificent Maria Elena, the great love of his life. Despite their profound connection, their passions ran too high for them to be together. Once, things got so cataclysmic that Maria Elena stabbed him in a mad fit of jealousy. That night, Juan Antonio invites the girls to his room—an offer Vicky adamantly refuses and Cristina willingly consents to. But just as Cristina and Juan Antonio are about to fall into bed, Cristina becomes ill, and it’s Vicky who spends the remainder of the weekend alone with him. Juan Antonio takes Vicky to meet his father and opens his heart about his childhood hopes and his turbulent relationship with Maria Elena. Perceiving a deeper side to him, Vicky gradually sheds her misgivings, and during the romantic night before they leave Oviedo, Vicky and Juan Antonio make love. After returning to Barcelona, Vicky can’t stop thinking about Juan Antonio. Meanwhile he directs his romantic attentions to the available and willing Cristina, who soon moves in with him. When Vicky expresses her disappointment, he points out that as she’s engaged, it would cause needless pain for everyone if they continued. Indeed, Vicky’s fiancé Doug (Chris Messina) arrives in Barcelona early, and the two are soon married. As Cristina and Juan Antonio settle into a dreamy life together, one night he is awakened by an alarming phone call—Juan Antonio’s ex-wife Maria Elena is at the hospital after a suicide attempt. Returning home with the dazzlingly beautiful and tempestuous Maria Elena, Juan Antonio explains to a stunned Cristina that his she will have to stay with them for a few months, as she has nowhere else to go. Jealous and suspicious, and subject to wild mood swings, Maria Elena misses no opportunity to bicker with Juan Antonio and put Cristina down. In time she becomes more relaxed and settles into a warmer relationship with Juan Antonio and even mentors Cristina’s pursuit of photography. Maria Elena tells Cristina that she is the “missing ingredient” that allows her to live happily with Juan Antonio. In a transition that is tranquil and natural, the three of them become lovers. By chance at a party sometime later, Vicky sees Judy kissing Mark’s business partner. After Judy tells Vicky that she hasn’t been in love with Mark for years, Vicky reveals her feelings for Juan Antonio. Determined to rescue Vicky from her own fate, Judy tries to bring Vicky and Juan Antonio together. Meanwhile, Cristina, as always, is starting to get restless. As the summer draws to a close, Vicky and Cristina learn some hard lessons about love—and about themselves. Set against the luscious Mediterranean sensuality of Barcelona, VICKY CRISTINA BARCELONA is Woody Allen’s funny and wise meditation on love, in all its romance, exhilaration, heartache, and elusive mystery.