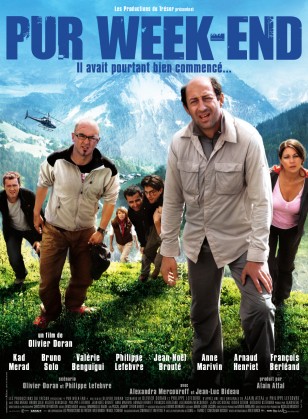 Long synopsis : Easter Weekend, and Fred and Vero Alvaro are getting ready to receive their usual guests, Alex, Sam, Sarah, Francois - four urbane and successful young professionals - and David, the wastrel. They all met 20 years ago, at the holiday camp where Fred and Vero were instructors. And every Easter since, they have gathered for a hike up Iseran Mount. This year, however, none of them has any idea what lies ahead. David, currently serving a three year sentence for dealing dope, has obtained a special leave of absence. 72 hours, he swears, plenty of time for them all to reach the summit. In fact, he has been granted only 24 hours. He's a fugitive. And he's got no intention of giving himself up. So our gang faces a dilemma: turn David in or let him get away while inventing a credible story for the cops. Loyalty demands the second option. But there's another twist. Before joining them, David broke into Alex's office and stole a huge sum of cash. Alex pursues him as he heads for the Italian border. The others have no choice but to join him. Playing the leader as always, Fred convinces the police that David has taken them all hostage, believing this will allow the young man to cross the border and all of them to escape justice. What he doesn't know is that David's cellmates - a couple of real heavy duty villains - have also escaped. For the cops, it's clear - their breakout and David's hostage taking are part of the same picture. Catch David, and they'll get the big boys. Thus an innocent weekend get-together degenerates into a madcap flight from justice, as our heroes flee south with every cop in France hot on their heels. Tempers explode, relationships are thrown into chaos. Their complete inability to handle the crazy situation, compounded by Fred's tiresome 'leadership', Vero's endless self-doubt and the ever-more absurd and deranged selfishness of the others pushes things to breaking point.